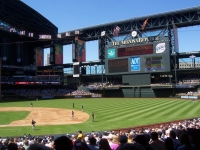 Chase Field (formerly Bank One Ballpark) is a baseball stadium located in downtown Phoenix, Arizona and is the home of the Arizona Diamondbacks of Major League Baseball. It opened in, just in time for the Diamondbacks' first game as an expansion team. Chase Field was also the first stadium built in the United States with a retractable roof.

View the embedded image gallery online at:
https://www.eventeasy.com/select-region/arizona/stadium-arena/item/883-chase-field.html#sigProId89d58a658d
More in this category: Salt River Fields at Talking Stick »
back to top